Programming Languages that Pay the Most

Ever wonder which computer programming languages pay the most? According to Business Insider, the average salary for computer programmers just hit an all-time high as it approached $100,000. 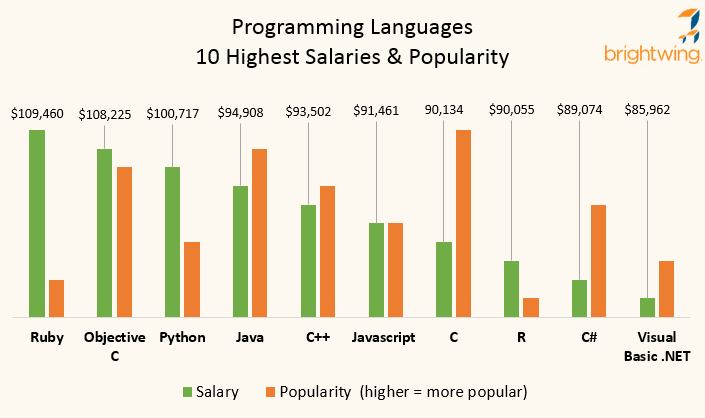 Although it’s not quite as popular as your Java and C languages of the world, Ruby has been emerging lately as one of the top choices for tech startups in the United States. Since it’s fully-open sourced, and has a large community culture, Ruby is likely to rise in popularity soon.

Used by some of the first iOS developers, it comes to no surprise that Objective C is one of the most popular and rewarding programming languages. Today, object-oriented Objective C, often works side-by-side with Apple’s new Swift language.

This widely used high-level programming language is perhaps as popular as it is because it allows programmers to express concepts in fewer lines of code.

One of the biggest reasons Java is so popular today is because it’s a favorable option for client-server web applications. There are approximately 9 million Java developers – many of them can expect to earn nearly $100,000.

In the middle of the pack comes C++, a general-purpose programming language that has been around since the early 80’s. Used for many system programming situations (i.e. embedded systems), experts developing in this department can bank about $93,000 on average.

JavaScript is a dynamic computer programming language. It’s probably not as popular as its big brother Java because Javascript code is run on a browser only, where Java creates applications that run in a virtual machine or browser.

Originating in the 1970’s, C programming language is the oldest, and most popular of all other relevant languages. Many languages have borrowed from C, including Python, Java, and JavaScript.

The R language is widely used among statisticians for developing data analysis and statistical software. Learning this language is probably right down your alley if you enjoy math.

C# is a newer language that is an evolution of C and C++. It was designed to build a wide range of enterprise applications that run on the Microsoft .NET Framework.  This language is trending upward in popularity and has a diverse variety of programming styles.

Another major language of the .NET Framework is Visual Basic .NET. This language uses statements to specify actions, and is mainly used for commercial purposes. Although it comes in 10th in salary (out of hundreds), it’s still among the best languages to know in 2015.

Most of these programming languages are paired with IT jobs that are in high demand –  some of which will surely be around for a long time, but are increasing in popularity and competition every year. No matter the case, if you’re thinking of being a computer programmer or learning more coding languages, you’ve most likely made a good decision.